The Naadam festival is one of the most Mongolian experiences you can have. This summer festival has been going in one form or another for centuries as a display of the three Mongolian manly sports; wrestling, archery and horse racing. Today every district has their own celebrations with the best athletes being sent to the main showdown in the capital of Ulaanbaatar.

For travellers the festival starts with the opening ceremony. A two hour choreographed spectacle encompassing the history of Mongolia in interpretative dance. There are hundreds of performers in costumes, parades of nomads and their animals, and even a speech from the Mongolian President (in Mongolian of course). 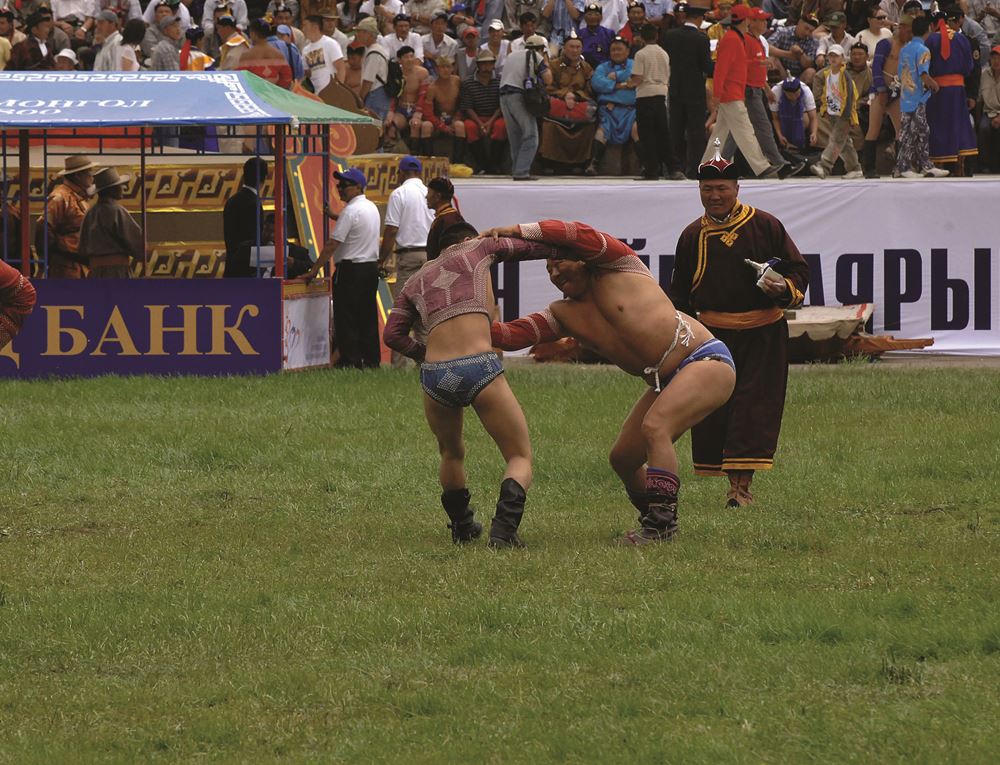 Once the opening ceremony is complete everything is cleared away and the wrestling begins in the center of the stadium. Due to the set up you might want to bring a pair of binoculars or a telephoto lens for your camera as the wrestlers stay far in the middle of the arena without closer viewing for spectators. Only men are allowed to participate in this sport. According to legend, the revealing style of the wrestling outfit came to be after a woman entered the competition and won. Since then wrestlers need to show their chests to prove they aren’t a woman. There are also no weight divisions in Mongolian wrestling. The biggest man can be paired up with the smallest. They claim it’s not about your size but your skill and technique. We’ll let you decide on that one.

Outside of the stadium is a full festival set up with tents selling all sorts - from tasty treats like meat on sticks and fried dumplings, to souvenirs like hats and traditional costumes. It’s packed and everyone is having a good time. While it’s getting more popular with international tourists, it is still a big draw for Mongolians as well.
A little further from the stadium are the archery fields. Both men and women compete in the sport alternating who is shooting and who gets to stand by the target. The targets are stacked balls of weaved camel hide making the target low to the ground and more difficult to shoot from 60-75 meters. While their aim is good, it doesn’t mean those standing close to the target don’t have to jump out of the way every once in a while! Don’t worry, the audience in the stands are safe and the arrows aren’t that sharp. Those by the targets sing little folk songs to cheer the archers and tell them the results by hand signals. 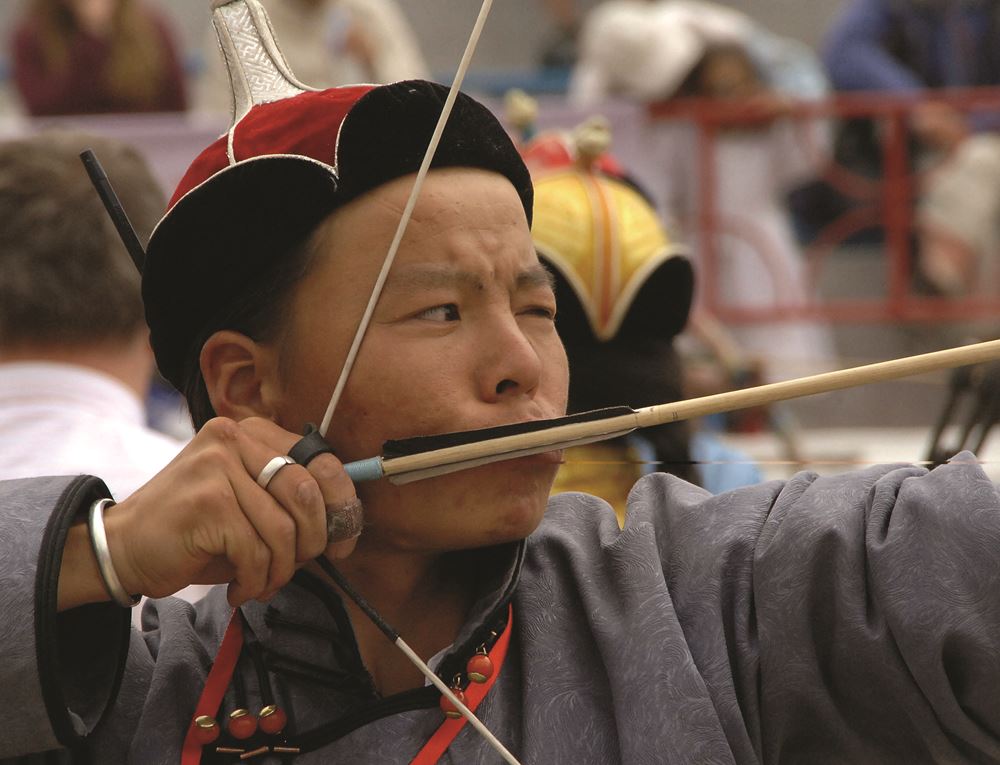 An unofficial fourth ‘sport’ called ankle bone shooting is also around the stadium. It’s a game similar to archery or ten pin bowling where the players try knock over stacked ankle bones of sheep targets that look like dominos standing up on end housed in a wooden box by shooting another piece of bone at them. The game attracts a crowd especially around the really good players, but there are many games going at once so it’s pretty easy to watch from the sidelines. 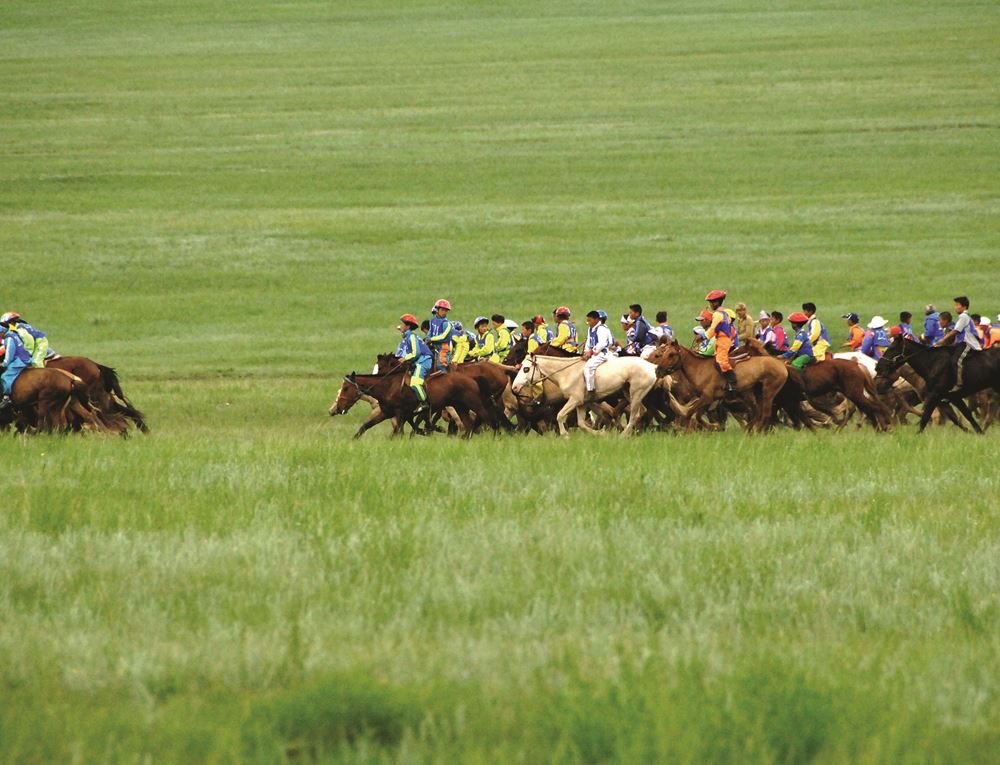 The last sport of Naadam, horse racing, takes place outside of the city. Jockeys must be between the ages of 6 and 13, but both boys and girls can compete. The length of each race is determined by the age of the horse. The two year old horses race the shortest length of 16km while the seven year old horses run for 30km. While wearing protective gear or using a saddle is not a regulation, many of the kids do take advantage of helmets and padding just in case. Most of these kids learn to ride before they can walk so it is amazing to see them fly by at full speed, some bareback! While only the end of the race can be seen from the stands, there is a big screen with live video from the camera men following beside the race in 4x4 vehicles. As with all of the other sports, this is also broadcast all over the country so you really can’t miss it!

This festival lasts all week and the city of Ulaanbaatar takes full advantage with nightly concerts, a traditional costume festival, and even fireworks. It’s the Mongolian party of the year and you need to put it on your travel bucket list! 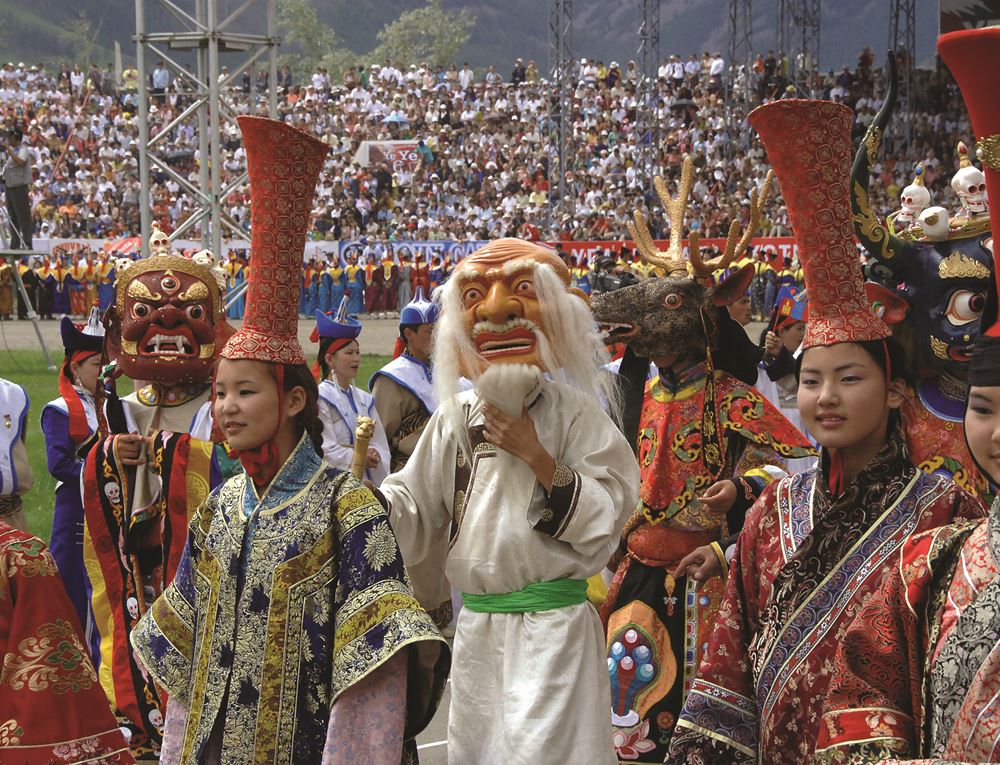