After reading about The Great Silk Road I have always had it on my bucket list, and I was lucky enough to get to experience a little of this historic route. Nothing prepares you for the beauty and grandeur of the ancient cities with their fabulous mosques, madrasas and mausoleums in every shade of blue. The location of Uzbekistan made it one of the key stops on the Silk Road which has left a deep routed legacy which is visible in their culture, architecture and food.

Our first stop was the Capital Tashkent which is a showpiece of Soviet and post-Soviet architecture. It was a strange city and felt quite austere which is down to the mix of the stark Soviet buildings and big boulevards. In the old town we got our first viewing of the famous mosques, Tila Shaikh mosque which holds one of the rarest copies of the Quran. One of my highlights in Tashkent is the subway, not to get out of there but each subway station has been designed differently from cosmonauts to mosque like architecture and is really a work of art, but it also had a second role as a nuclear bomb shelter. After all this historic overload we were invited to tea at Akbar and Alisher Rakhimov's workshop who are a famous family of ceramists in Uzbekistan. It was an honour to get to see their unique collection of works. I was only in the city for 24 hours so very difficult to judge a city in that time frame but would recommend a stay here for a couple of nights if your itinerary allows.

Next stop is Khiva, a short flight from Uzbekistan to Urgench, just over 2 hours of a flight and 30 km drive from Urgench to Khiva. What a fascinating town! It is UNESCO protected and extremely well preserved. It is quite compact and easy to explore on foot. The city dates back more than 2000 years and you certainly feel like you are taking a step back in time rambling through the city with its beautiful mosques, madrasas and furry hats. My favourite moment of this day is stopping in a little tea house, sipping beautiful refreshing Uzbekistan tea on a balcony overlooking the citadel. It was so easy to let my mind imagine back to what life was like as history seeped from every wall here.

After Khiva we set out across Kyzyl Kum desert to Bukhara. The drive took us approx. 7 hours by car with our own private driver. The Great Silk Road was routed through the same road that we had taken. I would like to say that it was a lovely smooth ride, but it was rough in places and the driver was an expert of manoeuvring around the big gaps in the road, prepare for a bumpy but fun journey.

Bukhara is home to hundreds of registered monuments, President Putin happened to be in town on the same day we arrived, but our paths never crossed. It was another day of seeing wonderful madrassahs, Mosques and Minarets. A visit to the massive Ark Fortress is a must and we happen to be there on festival day where there were food stalls, dancing, singing and plenty of market stalls set up around the old town. It was an amazing day. While in Bukhara we got to fit in lunch at the home of one of the best Suzan makers in Uzbekistan which are handmade tapestries. Here we got to taste the traditional Uzbek dish plov, which was very nice but a little heavy especially when Uzbek hospitality is a bit like our own once you finish it another dish appears! I would suggest a two night stay here as there is so much to immerse yourself in. 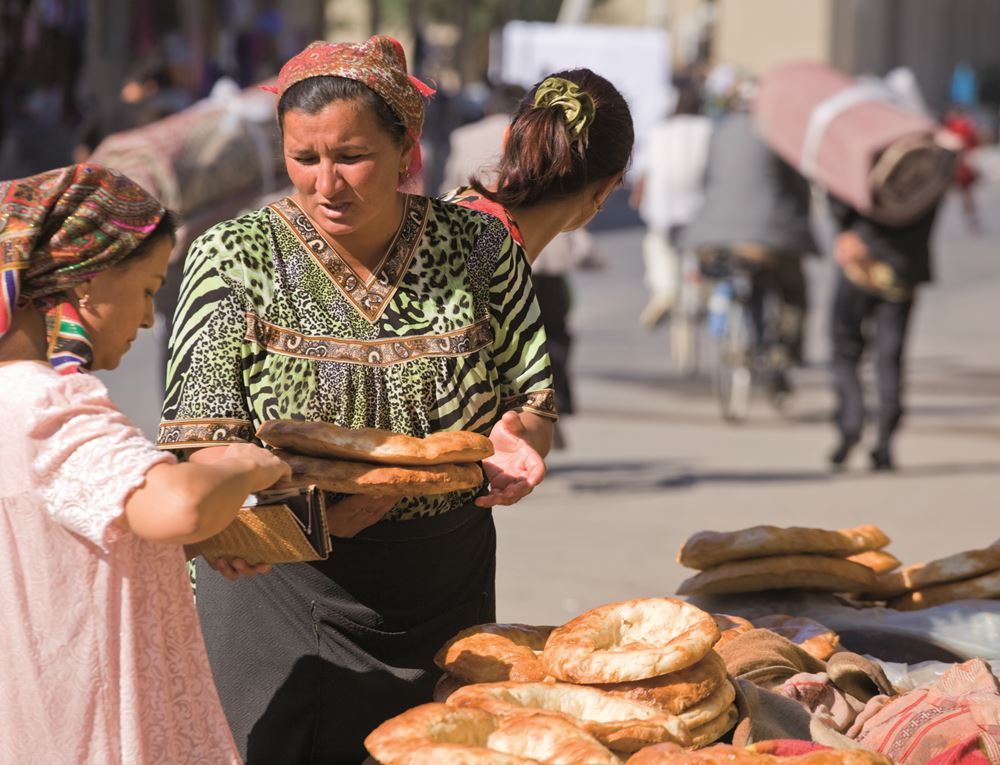 From Bukhara we were onto Samarkand but made a stop in Shahrisabz which is the birthplace of Great Amir Timur. It is a worthwhile stop as it ties in a lot of the history and was interesting to see the Saroy Palace ruins, mosque and Amir Timur’s mausoleum. It also seems to be a very popular spot for local weddings, and I lost count of how many I saw there during my visit.

Our last stop, Samarkand! One of the oldest existing cities in the world. It is a great city to finish our tour of Uzbekistan. One the highlights was our visit to Registan Square which is the heart of the medieval city with three beautiful madrassahs. In the old days it would have been filled with bazaars selling silks and spices carried by the ancient traders passing through on the Silk Road.

The other highlight was a visit to Gur Emir a 14th mausoleum devoted to the leader Amir Timur which the locals say is a prototype of the Taj Mahal. It is wonderfully restored with gold leaf walls and the beautiful detailed ceramic tiles which are everywhere in Uzbekistan. Ulugbek’s observatory and the ancient settlement of Afrosiab are worth a visit if you have time. As our homeward flight was departing from Tashkent, we took the direct and very comfortable train service from Samarkand to Tashkent. Be warned though there it is a frantic pushing and shoving to get onto the train and it is every man woman and child for themselves!

Tourism is growing steadily in Uzbekistan and was made easier this year with the new visa process. We were accompanied by English speaking guides who were just amazing and made the trip for me as getting local knowledge is invaluable when visiting a country so rich in history.

If the Great Silk Road is on your bucket list and my trip has inspired you to visit this wonderful part of the world, find our Silk Road journeys here.